A mysterious manuscript about the discovery of Dunhuang manuscripts

The mysterious manuscript referred to in the title is a little notebook written in a cursive caoshu hand and is currently located at the Gansu Provincial Library. The title Dunhuang xianhua 敦煌闲话 (Idle Chat about Dunhuang) is included in the notebook so it is the original title. Otherwise nothing is known about it. Its content describes the manuscript discoveries at the early part of the 20th century at the Thousand Buddha Caves near the town of Dunhuang. This is a well-known story involving foreign explorers such as Aurel Stein, Paul Pelliot and Tachibana Zuicho but a number of aspects make this particular description of events peculiar. Not the least of these was that this seemed to be a text dating before all of this information had become commonly known in China.

I came across this notebook in a recent publication by the same title (Dunhuang xianhua, Gansu renmin chubanshe, 2009) that came out in a series called Dunhuang jiyi shuxi 敦煌记忆书系 (Dunhuang memory books) which I picked up at the bookshop of the GansuProvincial Museum. I was on a field trip with my colleague Sam van Schaik, re-tracing the pilgrimage of a tenth-century Chinese pilgrim through the Hexi Corridor. (See Sam’s blog Earlytibet.com for some of our discoveries during the trip.) The book Dunhuang xianhua intrigued me from the very start. First of all, there was no date to it, nor author. One could only hypothesize about who and why wrote it. Then there was a markedly Japanese-friendly voice that differed from the usual Chinese attitude towards A) the Japanese and B) foreigners who took Dunhuang manuscripts out of the country. Based on a few references to historically identifiable references such as one of Chiang Kai Shek’s military campaigns or Sven Hedin’s expedition, Li Zhengyu, who wrote the Preface to the published edition dated the notebook to about 1943. This, of course, made the pro-Japanese voice appear even more bizarre, as this would have been during the prime of the Resistance War with Japan.

Since I was already in Lanzhou and I still had a few hours before my plane left, I decided to visit the Provincial Library and look at the original. I was directed to the Northwestern Regional Texts section on the 3rd floor where I soon found out that there was yet another copy of the same manuscript, only this one in a single volumes, as opposed to the two volumes of the original. I asked to look at both. The two-volume notebook was the original, written in an extremely cursive script (kuangcao 狂草)which was very hard to read. The one-volume item was a manuscript copy of the original manuscript, according to the colophon completed in 1980 by Zhang Bangyan 張邦彥. This was in a more legible running xingshu script. The two “editions” were more or less the same, with minor discrepancies, such as writing dates in Western numerals vs. Chinese characters, substituting some of the simplified forms of the original cursive script with traditional forms, etc.

To me, one of the surprising points in the manuscript was that the surname of Tachibana Zuicho 橘瑞超, the young Japanese explorer who visited the caves with his colleague Yoshikawa Koichiro 吉川小一郎 in January 1912 was written as 立花 (as opposed to 橘), which makes two conjectures possible regarding the person who wrote down the story in this notebook. First, that he was not Japanese because, apart from the fact that the narrative is written in classical Chinese, he would have known the correct way of writing Tachibana’s name who had been well-known in Japan on account of the expeditions. Secondly, that he heard the story rather than read it, otherwise he would have remembered how it was written. This latter point is of course corroborated by occasional references in the text to having heard all this from a “Master” over tea and at his studio, etc.

The really interesting issue with regard to this text is, of course, who the Master was. Zhang Bangyan who made a copy in 1980 thought that this must have been Zhang Daqian 張大千, the celebrated Chinese painter who was also an avid collector and who had spent an extended period of time at the Dunhuang caves, copying the paintings. He also thought that the text was written by a Japanese author and then translated into Chinese. Li Zhengyu, however, in his Preface to the published edition hypothesized that the Master might have been a Japanese scholar and artist, and the best candidate would have been Nakamura Fusetsu 中村不折, the famous Japanese painter, calligrapher and collector. To me this latter choice is particularly appealing because Nakamura was well-known for his interest in Chinese art and calligraphy, especially the Dunhuang manuscripts. In fact, his immense collection, which is now part of the Nakamura Museum of Calligraphy, includes about a hundred and fifty Dunhuang manuscripts, and a number of others from Turfan and other sites in Xinjiang. For this very reason I found it strange that no mention was made of a piece of Nakamura’s writing called Shinkyo to Kanshuku no tanken 新疆ト甘肅ノ探険 (Exploration of Xinjiang and Gansu) published in 1933. 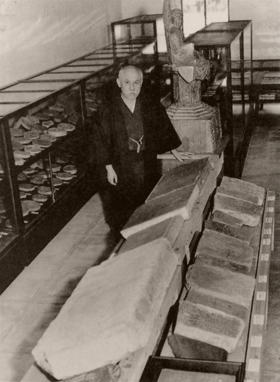 Nakamura Fusetsu in front of his collection of Chinese art (From the Taito City Culture Guidebook website.)

Unfortunately, this is an extremely rare publication and although I have come across it before, I was not able to consult a copy now when I needed it for a specific task. Eventually I had no choice but to buy a copy in Tokyo, hoping that I would be able to find something useful in it and thus my investment would pay off. A quick read through the first pages seemed to confirm my earlier hunch that there is a connection between the two texts, although the Chinese one is definitely not a translation of the Japanese. Instead, my guess would be that Nakamura held talks about the topic of Dunhuang manuscripts, either publicly or to a select group of his disciples, and this manuscript in the Gansu Provincial Library is a record of these talks. Recorded not by Nakamura himself but by one of his disciples who happened to be Chinese. How this notebook got to Gansu remains a mystery but one would think that this had to have happened because of the proximity of the Dunhuang caves.