Every now and then we come across impossible dates in Chinese manuscripts and inscriptions, which refer to years in reign periods that never existed. The common explanation for these is that the place where the manuscript was written was remote or peripheral and it took years until the news of the death of an emperor reached these lands, and, until that happened, people continued to use the old calendar. This explanation is puzzling because a lot has been written about the surprising efficiency of Chinese bureaucracy, in which information travelled at great speed. Thus by lighting the fire on watchtowers, news of a foreign invasion could reach the capital lying thousands of miles away within a single day. Surely, the death of a monarch and the ascension of his successor was an event worthy of communicating rapidly to the remotest corners of the empire. But then how are we to explain these impossible dates?

I suspect that a big portion of such dates are actually not impossible at all. Thus in manuscript IOL Tib J 754/C (from the Stein collection at the British Library), which is an early Song copy of an inscription in Liangzhou, we read in Enoki’s catalogue (“Appendix on the Chinese manuscripts,” in Vallée-Poussin, Louis de La. Catalogue of the Tibetan manuscripts from Tun-huang in the India Office Library. London: Oxford University Press, 1962) that the text talks about “the 9th year of the Baoding era” 保定九年, which is an impossible date because the Baoding reign (561-565) only lasted 5 years. Now looking at the photograph of the manuscript one notices that it actually has “the 1st year of the Baoding era” 保定元年, only the character 元 is written in running hand style. This date in the text refers to the founding of the Gantong monastery and, no surprise, in transmitted sources we can find that the monastery was indeed established in the 1st year of Baoding. So there goes the mystery.

In manuscript P.3720 from the Pelliot collection at the Bibliothèque nationale de France, there is a copy of a record about the building of the Mogao caves. The end concludes with the following words:

至大歷三年戊申即四百四年﹐又至今大唐庚午即四百九十六[年]
[時咸] 通六年正月十五日
Until the 3rd year of the Dali era (768), a wushen year, it has been 404 years; further on, until the gengwu year (850) of our present Great Tang dynasty, it has been 496 years.
The time is the 15th day of the 1st month of the 6th year of the Xiantong era

Now there is an obvious problem here with the numbers. The two dates of 768 and 850 are 82 years apart, whereas 496 minus 404 comes to 92. So we have a discrepancy of ten years inexplicable on the basis of the text alone. The solution to the problem lies in the date of 850, referred to as “the gengwu year.” The rest of the text points to 860, which would have been a gengchen year, and the first year of the Xiantong reign period. Thus the mistake was in a single character, substituting [geng]wufor [geng]chen.

At other times, it is simply a mistake in the original text. Hans Bielenstein, for example, compared biographies from the Houhanshu that also survived as inscriptions (“Later Han inscriptions and dynastic biographies: A historiographical comparison”). There he cites some examples of impossible dates where the transmitted biography corrects the date on the inscription. Only in one case does the inscription correct the official biography, which is obviously a case of an error in the course of textual transmission. After listing several examples, Bielenstein also adds, “in rare cases, there is no way of reconciling dates at all.” But this simply means that we do not have enough data. Were we to find another inscription or a group of Han wood slips in a tomb, perhaps we could understand where the mistake is. 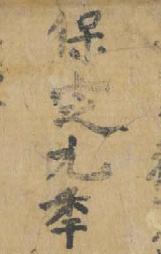 1st year of Baoding on the manuscript