The Houma covenant texts (Houma mengshu 侯馬盟書) are a large group of jade and stone tablets from the early 5th century BC. Accordingly, they are 2,500 years old and were written approximately during the last years of the life of Confucius. Although it might seem a bit counter intuitive to call stone tablets manuscripts but they were produced using a stylus and ink, that is, they were not inscribed or incised but written onto the surface. There are several groups of texts in this corpus and within each group the tablets record the exact same oath, with only the oath taker’s name changing. These are formulas. Each person who took part in the covenant ceremony had his oath recorded by the scribes, using the same “form”. Actually, these might be the first forms in history.

When we analyze scribal habits and practices, one of the interesting things we can look at is the way they made corrections. We have plenty of such corrections in medieval manuscripts written on paper but much fewer on bamboo slips documents from the Warring States period. One of the reasons for this might be that it was very easy to replace a bamboo slip if a scribe made a mistake, and he only had to redo a few characters. In addition, we know from transmitted sources that scribes could also shave off a tiny layer of bamboo to remove the mistaken character. When such a drastic intervention is done on paper, it is quite visible and we have examples of this from the medieval period. But on bamboo or wood, this would not produce a very conspicuous result and considering that we almost never have a chance to analyze such manuscripts personally, let alone touch them by hand, we can see that even if there have been many corrections like this, they would probably remain unnoticed.

In contrast with this, the Houma covenant texts were written on jade and stone tablets. Replacing the tablet every time the scribe made a mistake would not have been a practical solution, as these were obviously much more valuable than thin slips of bamboo. And indeed, there are corrections on the tablets. The examples below all show the section from the beginning of the formula which is essentially the same on each tablet. There is no variation in the text, apart from the name of the oath taker, which is not shown here anyway. This part of the oath says, “Should Zhao (i.e. the name of the oathtaker) dare not split open his abdomen and heart in serving his lord…” 趙敢不判其腹心以事其主. (Here the word written as 判 has an additional 門 around it and is understood by most researchers to mean something like “to split open” or “to bare”.) But the part shown below consists of the words “not split open his abdomen and heart in serving …” 不判其腹心以事.

In example A, you can see that the character 其 (‘his’), written in its early orthography as 亓, has been inserted in small script on the right side, between two characters. This clearly shows not only that it was omitted but also that contemporary scribes considered this a problem and felt the need to rectify the omission. Example B shows a similar case, only here it was the character 之 mistakenly written instead of 以 (‘in order to’). The wrong character does not seem to have been marked in any way but the correct one was inserted in small script.

Example C shows the same mistake as in A, only here the mistake was not corrected, probably because it remained unnoticed. Otherwise it is hard to explain why the same mistake in A was corrected. Finally, example D is yet another case with an unnoticed omission, only here two words were omitted: 腹心 (‘abdomen and heart’). This, of course, renders the sentence completely ungrammatical so it clearly is a mistake that should have been corrected. Especially considering that in A the omission does not actually make much of a difference grammatically and the reason why it became corrected was simply that it deviated from the formula. Thus in D we have a significant problem. 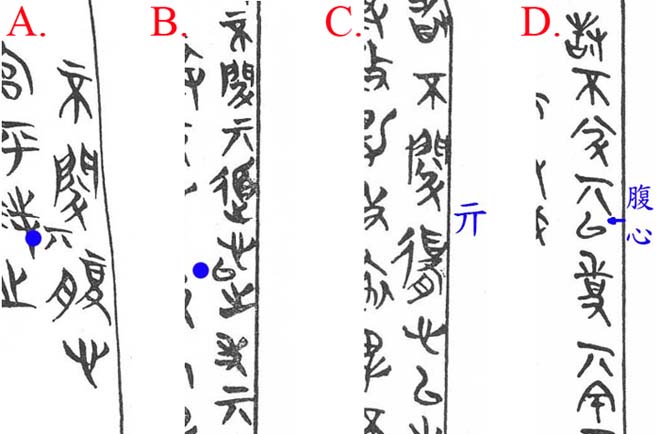 Corrections in the Houma texts

The above cases are only a few cases that show what are possibly the earliest examples of corrections in Chinese manuscripts. A thorough analysis of bamboo slip manuscripts from the Warring States period would enable us to follow the evolution of these scribal techniques and see whether traditions or lineages can be traced at all. But this will have to be done elsewhere.