Medieval manuscript scrolls are often ruled with grid lines to guide the hand of the calligrapher. These lines are a basic feature of most standard Buddhist and Taoist scrolls, which typically have 17 characters per line and 27-28 (or 31) lines per sheet of paper. But other types of manuscripts with less standard layout also often employed the same system of grid lines. There are usually two horizontal grid lines, one at the top of the sheet and one at the bottom, creating a margin of an inch or two on both ends. The vertical grid lines are drawn to connect the horizontal ones, and the characters are then written between the vertical strips created this way. This produces an even and aesthetically pleasing appearance. In some cases, the vertical grid lines or the horizontal ones can also be missing, which surprisingly does not seem to affect the quality of calligraphy. Manuscript Or.8210/S.230 (Plate 1) below is a typical example of the use of vertical and horizontal grid lines. 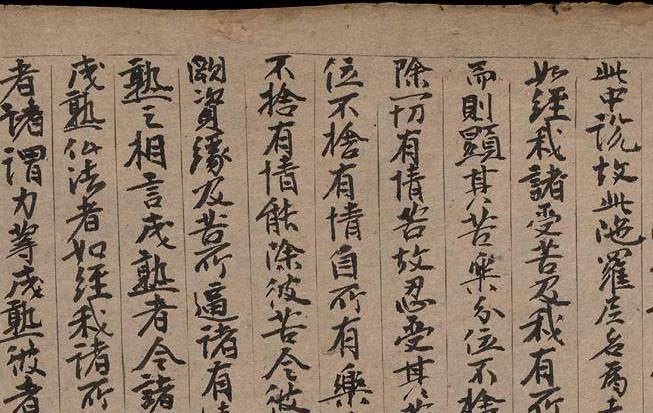 Even though there is usually an even number of characters per line, these are not aligned horizontally, as they vary in size and spacing according to the rhythm of the calligraphy. For this very reason, there are no horizontal grid lines except for the two main ones which enclose the text from the top and bottom.

In most cases the grid lines are very faint and appear to our modern eye as if drawn with a pencil. In reality, they are written with a thin brush using diluted ink. This way, they do not dominate the layout but remain in the background, at times staying almost invisible. This suggests that they were not strictly speaking part of the design but rather a trace of the process of creating the sutra. In other words, their functionality lasted only while the text was being written and after that they lost their use. Having said that, there are cases where the grid lines are very strong and were obviously intended to remain highly visible. For example, in Or.8212/480 in Plate 2, an early fragment from Loulan (3rd-4th century?), the lines are extremely well pronounced and go well beyond seving as guidelines for the calligrapher. They were certainly intended to be part of the layout. 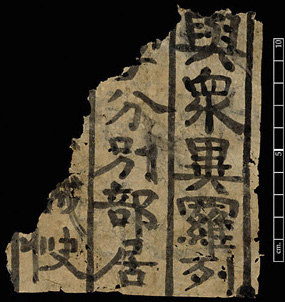 An even more interesting case is Pelliot chinois 4500 (see Plate 3), a silk manuscript with an apocryphal sutra where the characters are embroidered onto the material. Similar to sutras written on paper, the text is guided by vertical and  horizontal grid lines, regardless of the fact that the artisan embroidering the characters probably did not need such devices to keep the characters straight. Nevertheless, as far as I can see from the online photographs of the verso of the scroll, the stitchings were done over brush-written characters and it is possible that the grid lines were used in the process of writing the text with a brush, before having those embroidered. This scenario, however, does not explain why the lines had to be so prominent. All in all, there are clearly cases when the grid lines do not serve an immediate role but are created or preserved to be part of the layout design. This is also corroborated by their presence in many stone inscriptions where they would have served no functional purpose whatsoever. 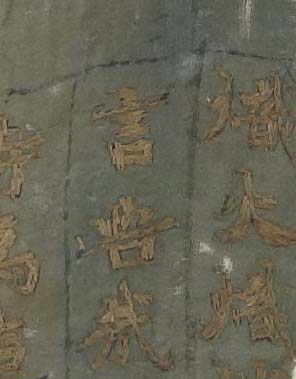