Abbot Wang from the Mogao Caves

Abbot Wang, also known as Wang daoshi or Wang Tao-shih, is one of the most infamous figures in the history of Chinese archaeology. He was the Taoist priest (i.e. daoshi) who stayed at the Mogao Caves near Dunhuang, taking care of the Buddhist temple complex when Aurel Stein visited the site in the autumn of 1907. In 1900 Wang had found in one of the caves a hidden chamber filled to the ceiling with ancient manuscripts and silk paintings. It has become a legend how Stein convinced the priest to part with tens of thousands of scrolls in exchange for a modest donation towards the restoration of the temples. A few months after this the French sinologist Paul Pelliot appeared on the scene and was able to acquire another sizeable collection, which was, on account of his competence as a sinologist, in many ways superior to that of Stein. Next came the Japanese and later the Russian expeditions, each taking home collections of manuscripts.

Although at the time there was little animosity towards either foreign explorers or Abbot Wang, with the rise of patriotic sentiments in the late 1920s, the transactions in retrospect received an increasing amount of negative publicity. As a result, Stein was branded a thief who deprived the country of an important piece of its national heritage, whereas Abbot Wang was perceived by the public as either a traitor who sold out his country to  foreigners or simply a fool.

In a photograph taken by Stein at the Mogao Caves (Serindia, Oxford: Clarendon, 1921, vol. II, p. 804) Abbot Wang does appear in a rather unflattering way, albeit perfectly friendly. His stance, clothes and expression all suggest a simple-minded person (see Fig. 1). 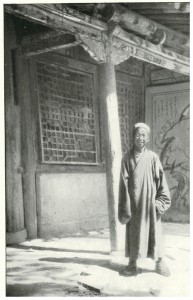 Perhaps because this image so aptly fits the general impression about the Abbot that it became very popular and by now this is how he is remembered. Stein’s description of the Abbot also matched the photo, as in several places he wrote about him in a decidedly dismissive way. For example:

Wang Tao-shih’s ignorance of all that constitutes traditional Chinese scholarship had soon been correctly diagnosed by Chiang Ssŭ-yeh. So I knew that no useful purpose could be served by talking to him about my archaeological interests, about the  value of first-hand materials for historical and antiquarian research, and the like, however helpful I had always found such topics for securing the friendly interest and good will of educated Chinese officials. (Serindia, vol. II, pp. 804-805)

Ironically, in this passage Stein criticizes Abbot Wang for his ignorance of “traditional Chinese scholarship”, of which he himself was even more ignorant, not even being able to speak any Chinese at the time. (Learning from the experience of the brilliant French sinologist Paul Pelliot, in later years Stein grew to understand the PR value of being able to speak Chinese to local officials and has made several attempts to learn Chinese.) We can also hardly blame the Abbot for not sharing Stein’s colonial eagerness to secure these “first-hand materials for historical and antiquarian research” and move them to Europe.

In any case, rather than writing a defence for Abbot Wang, I wanted to add to the public record two portraits from among Stein’s photographs which may help to add a human dimension to the simplistic image that currently prevails. The first one is actually from the same photo shown above, only zoomed in so that we can see the priest’s facial features. The other one is more or less unknown to the general public, cropped from a larger image where the Abbot appears only on the side. 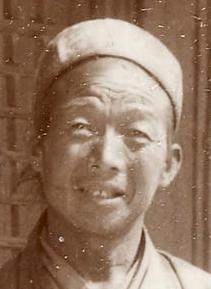 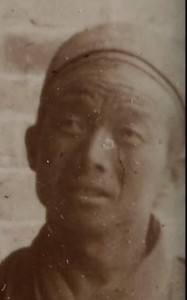 2 Responses to Abbot Wang from the Mogao Caves