The earliest catalogue of Dunhuang manuscripts

Modern scholars have often remarked how unfortunate it was that during Aurel Stein’s initial visit to the Mogao Caves in 1907 no attempt was made at prodicing a catalogue of the contents of the cave library. This was, of course, due to the lack of time and the abundance of manuscripts in the cave. Stein himself wrote about this in Chapter XXII of Serindia (vol. 2, p. 810) the following way:

Where the covering folds of the rolls were intact it was easy for Chiang Ssu-yeh to read off the title of the Sutra, the number of book and chapter, and anything else usually shown there. The information contained in those titles was of no guidance to me. The fact, however, that the headings of the rolls found in the first bundles were all different disposed of my apprehension that this great mass of manuscripts might be found to contain mainly an inane repetition of a few identical texts, after the fashion so widespread in modern Buddhism. At first I caused Chiang to prepare a rough list of titles; but as the Tao-shih gradually took more courage and brought out load after load of manuscript bundles for examination, all attempt even at the roughest cataloguing had to be abandoned.

It is obvious that Stein here was not describing the entire cave library but only the manuscripts brought out to him for inspection by Abbot Wang. But even these ones turned out to be too numerous to be able to catalogue. Yet when we examine the manuscripts of the Stein collection today, we can see that many manuscripts contain numbers and notes written on the verso by Stein’s secretary Chiang Ssu-yeh (aka Jiang Xiaowan 蒋孝琬). The titles are usually accompanied by strange-looking numbers. These are the so-called Suzhou numerals 蘇州碼子 or Huama 花碼, a traditional numeral system commonly used up to the Republican era in accounting and for other number-intensive tasks. Apparently, Jiang Xiaowan assigned the scrolls a number which he often augmented with the text’s title or a rough description on the outside of the scroll.

Jiang’s description sometimes consisted of only a number and the title of the work, as in S.101 which is a fragmentary copy of the Fomingjing 佛名經 (Fig. 1).

We can see that the red Suzhou numbers were subsequently written out in Arabic numberals in pencil (in this case 465), possibly by Jiang for the sake of Stein, or perhaps by Stein himself. Yet the Stein number of this manuscript is S.101 which is different from the 465 assigned to it by Jiang. In other cases, the manuscript would only have been given a number, without a title or any other comment (e.g. S.112).

Apparently, Jiang did not have much time to work with the material, nor was he particularly familiar with Buddhist texts. This is why some of his descriptions are rather rudimentary, such as in the case of S.111 on which he simply wrote “no title given” 未載名字 (Fig. 2). Indeed, the text, which seems to be a dhāraṇī, bears no title. 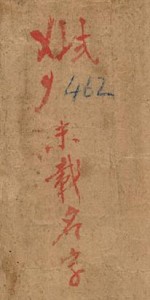 On S.114, which is a copy of the Lotus sutra with the colophon saying “copied reverently in the 3rd year of the Shangyuan reign (i.e. 676) by the lay disciple Zhang Che for the benefit of his deceased younger sister” 上元三年清信士張君徹為亡妹敬寫, Jiang copied down the title with the chapter numbers and almost the entire colophon (Fig. 3):

妙法蓮華經第七卷   自廿五品至廿八品
上元三年張徹為亡妹敬寫
Miaofa lianhua jing,  juan 7; from Chapter 25 up to Chapter 28
Reverently copied in the 3rd year of the Shangyuan reign (i.e. 676) by Zhang Che for the benefit of his deceased younger sister

In other cases, Jiang also included a note on the condition of the manuscript. Thus on the verso of S.1286 we read the note “A worn-out piece [i.e. fragment] of the Fomingjing” 破爛佛名經一塊 (Fig. 4).

This description is obviously neither scientific nor entirely accurate but it shows on Jiang’s part an occasional effort to label the manuscripts he identified and numbered with more than just the original title.

Particularly interesting is Jiang’s description of non-Chinese manuscripts, since at the time these were beyond the general knowledge of Chinese intellectuals. Thus on the verso of manuscript IOL Khot S 1, which has the Lotus sutra on the recto and fragmentary Khotanese texts on the verso, Jiang wrote that this was a “half-Indian Miaofa lianhua jing” 半印度文妙法蓮華經. He also writes on IOL Khot S 4 that the manuscript is “half Chinese, half Indian” 半漢半印度文, showing little awareness of the language seen on the manuscript which, of course, at the time, had not been deciphered yet. Yet Jiang’s comments are perhaps the very first remarks on Khotanese texts by a Chinese intellectual.

Jiang’s numbers and notes can be seen on many manuscripts in the Stein collection. I have not counted how many manuscripts are marked this way but it must be hundreds. While this is obviously a long cry from the entire collection, it nevertheless represents an important part of it. We would have to assume that these manuscripts were those Abbot Wang brought to Stein first and which Jiang Xiaowan tried to identify before giving up the project altogether as unrealistic. Yet Jiang’s numbers and notes are certainly catalogue data and if we took the time and effort to gather them together, we would have in hand the first ever catalogue of Dunhuang manuscripts, even if it covers only a relatively small portion of the corpus.