I have come across an inscription which is read in reversed order, that is, from left to right. This is a famous inscription called Mogaoku ji (Record of the Mogao Caves) on the wall of the antechamber of Cave 156 at the Mogao Caves near Dunhuang. A copy has also been preserved on a Tang manuscript that is kept at the Bibliothèque nationale de France (Pelliot chinois 3720) but there the text follows the usual order, from right to left.

Seeing this reversed inscription for the first time, I became quite curious about it and naturally wanted to make sure that it really was written from left to right. Unfortunately the original inscription is no longer visible due to recent deterioration and I could see literally nothing on the photographs. A tracing made a few decades earlier makes it possible to read the text and there the direction is reversed (see image below). Although I remained suspicious about the correctness of the tracing, recently I came across several other inscription-type writings executed in a similar manner, from from left to right. These are found among the textiles in the collection of the Museé Guimet, quite a few of which have multi-column inscriptions at the bottom of the painting, usually related to the donors who appear on the two sides of the text. These writings are written the same way as the Mogaoku ji, going from left to right. Now the textiles also come from Dunhuang and it is possible that this direction of writing was adopted from the Tibetans who had exerted a strong influence on Buddhist culture in Dunhuang. But to prove this, we would need more documents and the dates of the inscriptions would have to be determined with better precision. Also, it would be useful to have more examples of this phenomenon, to know whether it ever occurred in Central China or only in Dunhuang which had been occupied by the Tibetans for several decades and separated from the rest of China for another century or so. 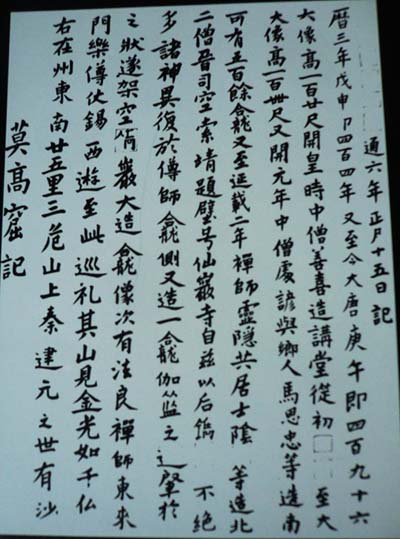